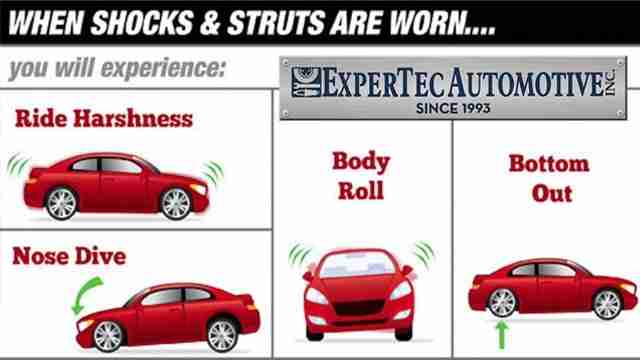 What’s up with shock absorbers and struts?

This week on ExperTec of Huntington Beach’s cars 101 blog, we’re gonna cover something that many people don’t really think about when it comes to automotive maintenance – shock absorbers and struts.

It’s a common mentality: the car will still run and drive without these components, so they are not important. But shocks and struts are actually key parts of a car’s suspension system. Neglecting them can have serious consequences. Sure, a car will still run if these key components are worn out, but they should not be overlooked. Worn and malfunctioning shocks or struts can actually be extremely dangerous.

To understand why they are so important, first we should look at what they do and how they work.

A shock absorber, usually just called a shock, is a part that is responsible for keeping the springs in the suspension from bouncing too much. With functional shocks, the springs in a car’s suspension will not compress or rebound as extremely as they would alone. They also do not keep bouncing for a long time as they would with worn or missing shocks. Shocks may also be called dampers because of their key function – “dampening” the movement of the car’s suspension.

Struts also do the job of dampening your vehicle’s springs’ movement, but they also are integrated into the car suspension’s structure. This makes them much more important than shocks – worn or faulty shocks can cause an uncomfortable ride or unpredictable handling, but with worn or malfunctioning struts, a car’s suspension can literally fall apart.

How can you tell when your shocks or struts need replacement? The safest and most surefire way would be to have them inspected annually by a professional mechanic, but if you neglect them for long enough they will begin to exhibit some noticeable symptoms: “Bottoming out”: if your car is riding unusually low on one end, it can be a sign that the shocks or struts on that end are worn out.

“Forward plunge”: if the front of your vehicle plunges forward harder than normal under normal braking, the front shocks or struts may be worn out.

“Rock and roll”: if the vehicle rocks or rolls from side to side around corners, your shocks or struts may be worn out.

Bumpy ride: an unusually bumpy or bouncy ride is almost certainly a sign of worn shocks or struts.

Unpredictable handling: if your vehicle’s handling seems to be harder to control than normal, your shocks or struts may be worn out.

Another sign of damage or wear to your shocks and struts is that they are leaking. Shocks and struts can be filled with either oil or air, and either one leaking means that they are damaged. Shocks that leak oil can be wet, or the oil may leak enough to drip down to the ground beneath the car. If your shocks or struts are filled with air, then you can spray them with soapy water and wait to see if air bubbles form, indicating the location of an air leak. Shocks or struts that are leaking should be replaced as soon as possible.

One of the easiest and most common tests to gauge the condition of shocks and struts is the “bounce test”. This is done by pushing down as hard as possible once on the front or back of a vehicle. If the car rebounds and stays at normal height without bouncing when released, then the shocks and struts are most likely still functioning normally. If the vehicle bounces several times before settling, then the shocks or struts most likely need to be replaced. A good general rule is to replace your shocks and struts every 50,000 miles as preventative maintenance.

Here at ExperTec Automotive in Huntington Beach, we can take care of any of your shock or strut problems. If you notice any of these symptoms or otherwise suspect that your shocks or struts may be in need of attention, call our state certified technicians today at (714)-848-9222 to schedule an appointment. ExperTec – Huntington Beach’s favorite AAA approved auto shop!